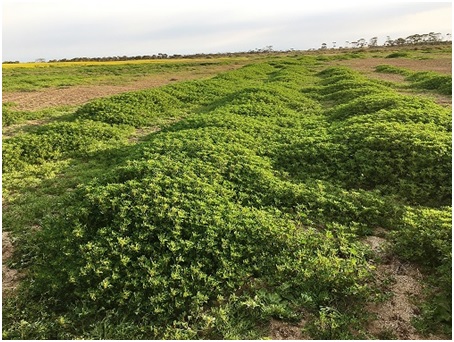 The Saltland Pasture Redemption Group and Project was initiated by the Coorong Tatiara Local Action Plan and Coomandook Ag Bureau to investigate the application of new developments in the productive use of saline land across the Coorong Tatiara. This included testing the suitability of new salt tolerant legume species Messina and complimentary salt tolerant pastures in broadacre farming systems. This project followed on from the Dryland Salinity Information Sessions held across the Coorong District Council area.

In 2016, three sites were established at Meningie East, Coomandook, and Cooke Plains.

Key issues that farmers wanted to investigate were:

1.  Does Messina grow in the environment?

2.  Can it be productive either as a stand alone species or as part of a pasture mix?

With funding support from the National Landcare Program - Smart Farms Program, and Australian Government Initiative the next stage of the Saltland Pasture Redemption Project began in August 2019. 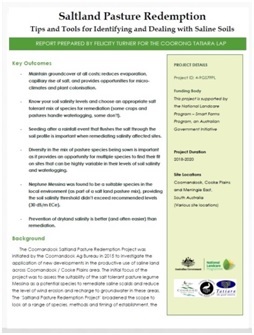 For a summary of the outcomes from this project please read on.

1. Use of groundcovers to test reduced salinity evapo-concentration over the summer period

Throughout the life of the project, the areas where successful establishment of pastures on saline soils occurred were

those where there was evidence of groundcover (green or dead plant material) or areas where the surface was slightly elevated.

In 2019-20 three sites were monitored to see if groundcover over the summer period provided any benefit to reduce the evapo-concentration / soil wicking of salt to assist in providing a less saline growing environment. Soil samples were taken on the 30th of January 2020 prior to a rainfall event.

The results can be found in the report ‘Saltland Pasture Redemption – Tips and Tools for Identifying and dealing with Saline Soils’ where it can be seen that the groundcover appeared to reduce the soil surface salinity levels across all sites both at the soil surface further down the profile emphasising the importance of trying to retain groundcover to reduce the level of salt scalding. 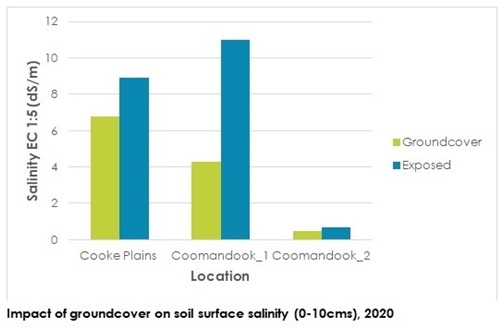 The time of sowing is critical in trying to remediate saline country. To improve the chances of plant germination, a ‘flush’ is thought to be required. In 2017-2018 this ‘flush’ wasn’t received and there was poor germination across all sites. In 2019, exceptional germinations were observed on hostile, saline soils. The late time of sowing paired with the salts being flushed through the soil was thought to be the key difference driving this success.

Rainfall records against sowing times were monitored across the 8 project sites and compared with soil moisture probe data at Moorlands and Coomandook.

Being able to graphically correlate the soil moisture probe data to what we were observing on project sites was encouraging, and supported the hypothesis that soil flushing was indeed important to improve the outcome of seeding salt tolerant pastures.

This was further supported by the Moorlands soil moisture probe data where the 2018 and 2019 data can be
compared. There was very little change in soil moisture levels from the 25-May to 25-June
2018, with the 50cm zone actually drying out further. This is in contrast to 2019 where there was an
increase in the soil water through the profile down to 50cms.

3. Use of mounds and mechanical intervention to enhance establishment (microclimates)

Throughout the project, different seeding techniques were used with varying success. The common method of seeding into the furrow and then providing a furrow with the press wheel was found to be detrimental to establishment of pastures in saline soil as the press wheel tended to create soil surface sealing impacting on germination. Those seeds that weren’t placed in the base of the furrow rather on the sides of the furrow were those that germinated more effectively (and were more likely to survive). 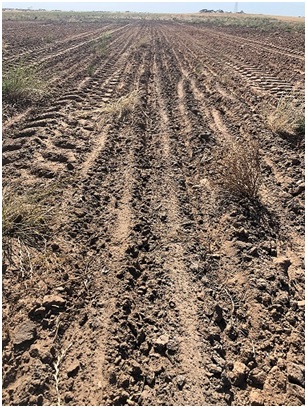 Mounding of a site at Coomandook in 2019 did not appear to improve establishment, however the time of sowing was very delayed at this site and may have required more rainfall to flush the salts out of the mounded area. This site will continue to be monitored as future opportunities allow.

In 2019, a paddock at Cooke Plains that had been impacted by salt since 2013 was deep ripped to 400mm in a series of strips to see if cracking open the soil or reducing a hard pan layer had an impact on the soil salinity levels and establishment of pasture species. A mixture of crop and pasture species was then sown 11th June 2019 across the site.

The ripping was very successful in improving the pasture production and overall health of the plants. Establishment of the small seeds in the mix was reduced (thought to be due to seeding depth on the soft ripped area). Ripping was also effective in decreasing the salinity levels in the treated area, both at the surface, and at the 10-30cm layer. 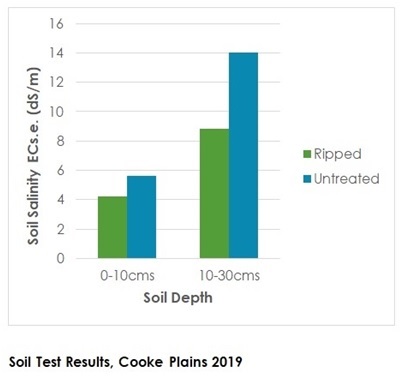 There is a wide range of tolerance of different crop and pasture species to soil salinity. The recently released salt tolerant legume Neptune Messina is adapted to winter-waterlogged areas where soil salinity in the top 10cms is 8-30 dS/m ECe in summer-early autumn (https://www.agric.wa.gov.au/neptune) 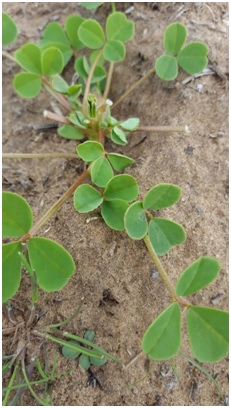 Above: Relative tolerance of crops and pastures to soil salinity (Hermann, 1995)

Farmer demonstrations from 2017-2019 largely focused on the new salt tolerant (and waterlogging tolerant) pasture legume Neptune Messina. It was assessed in different soil types and situations as both a stand-alone salt tolerant pasture, and as part of a saltland pasture mix where it’s role was to add protein to the feed mix and to provide nitrogen to the system (all seed was inoculated with the salt tolerant Rhizobium strain for Messina).

Feed quality samples were taken from the Cooke Plains 2 site in 2017. This testing found that the Messina was comparable in feed quality to other legume species, however farmer experience has been that in larger paddocks with a mixture of soil types and pasture species the Messina can remain largely ungrazed, but still provide valuable groundcover. In the absence of other feed sources, the stock will graze it.

Nodulation of the root system of Neptune Messina  was still evident in 2019 in a four-year old stand showing the ability of the rhizobia to survive in the hostile soils in the district. The persistence of the Messina and Rhizobia over four years has shown the role that the Messina is likely to play in saltland pastures;

This information is explained more fully in the report ‘Saltland Pasture Redemption – Tips and Tools for Identifying and dealing with Saline Soils’.

5. Demonstration on a range of soil types

As the water table below the surface rises, it brings with it dissolved salts to the root zone of crops, pastures, and native vegetation and potentially the soil surface. The first areas affected are often the low-lying areas within paddocks.

There appears to be two main processes occurring across the region leading to soil salinity;

Throughout the life of the project, various observations have been made by farmers around those areas that become saline over recent years. Saltland tolerant pasture establishment was undertaken on a range of soil types as part of this project. The key differences between soil types in terms of saline sites was that the salt ‘wicked up’ to the surface more readily under clay / heavy soils than sandy / light soils. However during this project it was the level of soil salinity and growing season rainfall, regardless of soil type, that were the limiting factors that determined the success or failure of seedling germination.

Several events were held over the life of the Saltland Pasture Redemption Project visiting demonstration sites and promoting project outcomes. Some of these Tours, Farm Walks and Workshops were held in conjunction with other projects to bring maximum value to participating land managers.

Please find a summary of events and supporting information below.

This tour was held on Wednesday the 2nd of October between 2pm and 6pm.

Covered on this day was: 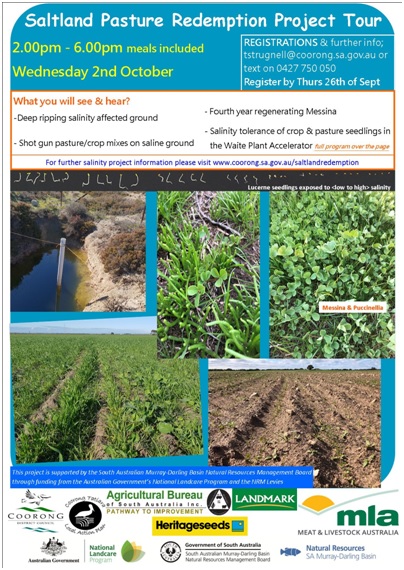 The information covered at this update had a particular focus on the Coomandook, Cooke Plains, and Meningie East localities.

Covered during the session was; a history of dryland salinity, hydrogeology update, overview of the Saltland Pasture Redemption Project, and a discussion as a group around where to from here.

Please click on the links below to access the presentations, and 'where to from here' discussion outcomes.

3. Hydrogeology Update and Mythbusting with Steve Barnett - Department for Environment and W(3640 kb)

Where to from here discussion outcomes Above: Steve Barnett from the Department for Environment and Water presenting on regional hydrogeology

This tour was held on Thursday the 27th of September 2018 touring sites around Meninge East & Field. To access the Tour Booklet and additional handouts from this and the associated Coomandook Tour please click on the links that can be found below. This tour was held on Wednesday the 19th of September 2018 touring sites around Coomandook and Cooke Plains. To access the Tour Booklet and additional handouts from this Tour please click on the links below.

Trends in Dryland Salinity across SA A Planning Forum was held in March 2018 with participating landholders, agronomists,  seed merchants, and Natural Resources SA Murray Darling Basin and South East. The outcomes and outlines of site plans for 2018 are contained in the report below. Relevant data from the 2017 season in contained in the presentation below. 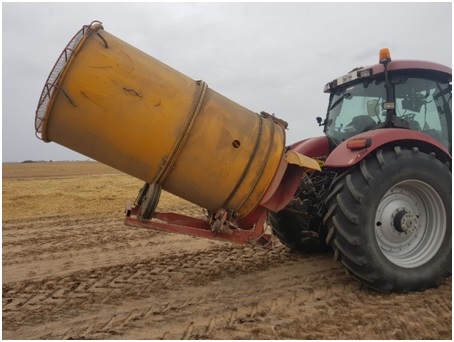 The first Saltland Pasture Redemption Site Tour was held on Wednesday the 20th of September 2017 with approximately 60 landholders, agronomists, NRM, PIRSA and SARDI staff in attendance. It was a terrific opportunity for a cross fertilisation of ideas.

With funding secured to run this project over another season several ideas were discussed about what aspects of saltland pasture and messina establishment we should look at next such as; 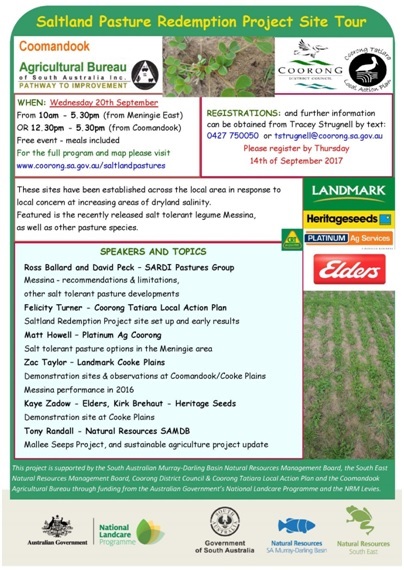 Below is a range of information from the day including; the tour booklet, various papers and fact sheets, and presentations from SARDI and Natural Resources SA Murray Darling Basin.

After lunch presentations were given by;

For more Saltland Pasture information and Fact Sheets that were produced to cover conditions in our region please click this link to return to our Saltland Pastures web page by clicking here.

For more information on this project please contact tstrugnell@coorong.sa.gov.au