Several on farm desalination units have been constructed across the Coorong District as an effective alternative to generate farm water supply and reduce SA Water mains use and costs.

Please click on the link below to open a comprehensive 'Desalination for Livestock Water Supplies Fact Sheet' detailing;

- What to consider in planning a On Farm Desalination Unit, 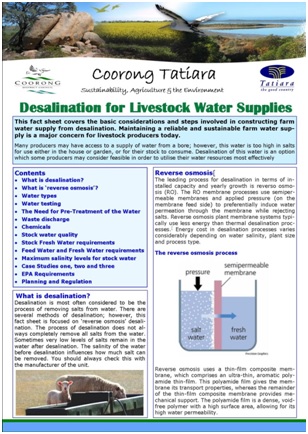 Additional information about On Farm Desalination can be found here;

At each of the Coorong Tatiara Local Action Plan Water Security Events desalination has been a feature.

Brian Schulz of Saltfree Desalination has provided information and demonstrations at each of our Water Security information events.

Please find further information in the documents below:

A Desalination Information Night was held on Wednesday the 3rd of April 2019, hosted by the Coomandook Ag Bureau.

Our second speaker was Gary Crisp, Engineering Manager with John Holland Group. Gary had impressive experience in desalination from an engineering perspective over the years with involvement in the development and construction of large scale desalination units in Western Australian, Gold Coast, and several in North America. Gary is a past director of the International Desalination Association.

Gary was supported by Chemical Engineer Brad Gauci, also from the John Holland Group, who provided additional information on chemical and process engineering in regard to the desalination process. 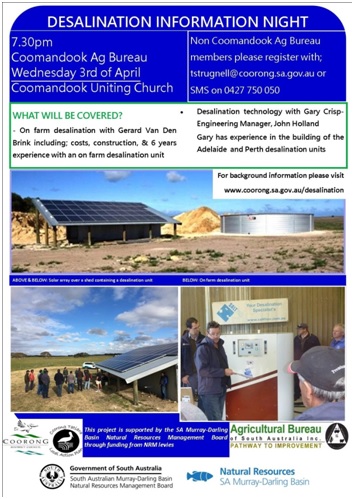 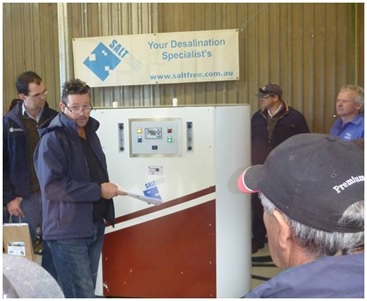